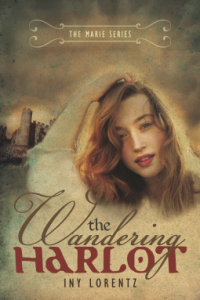 In 1410 in Constance, Germany, the beautiful Marie Schärer’s luxurious life as a merchant’s daughter is destroyed when her ambitious father arranges her marriage to a lawyer from the Black Forest named Rupert Splendidus. Her childhood sweetheart warns her of the attorney’s sly character and is tragically proven right the day before the wedding, when Rupert accuses Marie of unimaginable behavior and has her thrown into a dank dungeon, where she is brutally attacked by his henchmen. Unfairly condemned and banished from her home, Marie is forced to become a wandering prostitute to survive. The clever and kind Hiltrud befriends Marie, and the strong-minded pair sets out on spirited adventures—bedding counts, meeting scoundrels, and tricking foes—as Marie plots the ultimate revenge on the men who stole her honor and her family’s fortune.

Set against a richly detailed historical backdrop, this is the dramatic tale of one woman’s quest for vengeance, redemption, and real love.

I received my copy from the publisher via Netgalley in exchange for an honest review.

The Wandering Harlot has been translated from the original German copy Die Wanderhure by the very talented Lee Chadeayne. It was very easy to read and I didn’t feel that there could have been much, if anything, that was lost in translation.

It is a historical novel set in medieval Germany at a time when there was great unrest right across the country. Three claimants to the Papacy have caused massive upheavals and the nobility seemed to spend most of their time scheming and plotting against each other to gain more land or money.

The Wandering Harlot has been meticulously researched by the husband and wife writing team of Iny Klocke and Elmar Wohlrath, historians whose tales of medieval action, adventure, and romance reflect their academic interests and love for each other. All good books should transport their readers to another world and I felt that the attention to detail and accuracy that has clearly gone into writing The Wandering Harlot went a long way towards placing me in medieval Germany from beginning to end. I’m quite happy to be living in modern day Australia after reading about how easily a woman’s life could be ruined forever by the hearsay of so called respectable men back then!

The main character, Marie, and her tale of betrayal and revenge was interesting and complex. The story revolves around how she survives after being raped, publicly whipped and driven from her town, her travels as a wandering harlot and her overwhelming desire to destroy her betrayers.

The supporting characters are all well rounded and many of them could easily have their own novels written about them. Hiltrud is Marie’s companion on her travels. She was sold into prostitution as a child and saves Marie’s life by taking her under her wing and teaching her the survival skills she needs to survive in her new life. She dreams of leading a normal, simple life but she knows that there is really no other choice for women back then once that path is chosen for them.

Rupert Splendidus and his main henchman Utz are terrifying villains. Rupert because he was so diabolically evil and Utz because he was so violent and cruel. Neither one showed a hint of remorse about their evil deeds either, they seemed to quite enjoy them actually.

Michel, Marie’s knight in shining armor, was a bit of a let down for me in the end. He started off very heroically by setting out to find Marie when she is first driven out of town but their reunion was definitely not what I had been expecting or hoping for. Hopefully he redeems himself in the next novel in the Marie series, The Lady of the Castle which will be published in January 2015.

I predict that lovers of historical fiction or lovers of a good, strong story with well developed characters will want to devour The Wandering Harlot in one sitting. I’m over the moon to discover that the Marie Series has five novels in German and I can’t wait to read the next installment The Lady of the Castle in January

One thought on “Book Review: The Wandering Harlot by Iny Lorentz”

Looks like I'm going to be busy for a while! I ordered myself a little birthday treat and I am determined to teach myself some tarot. Thanks to @moonstonegypsyau for these gorgeous Universal Waite cards, divination book, and a lovely smudge stick 🔮 #tarot #tarotcards #universalwaite #divination #itsinthecards #tarotandtea